DREAMS OF A DREAMER IN THE MODERN AGE 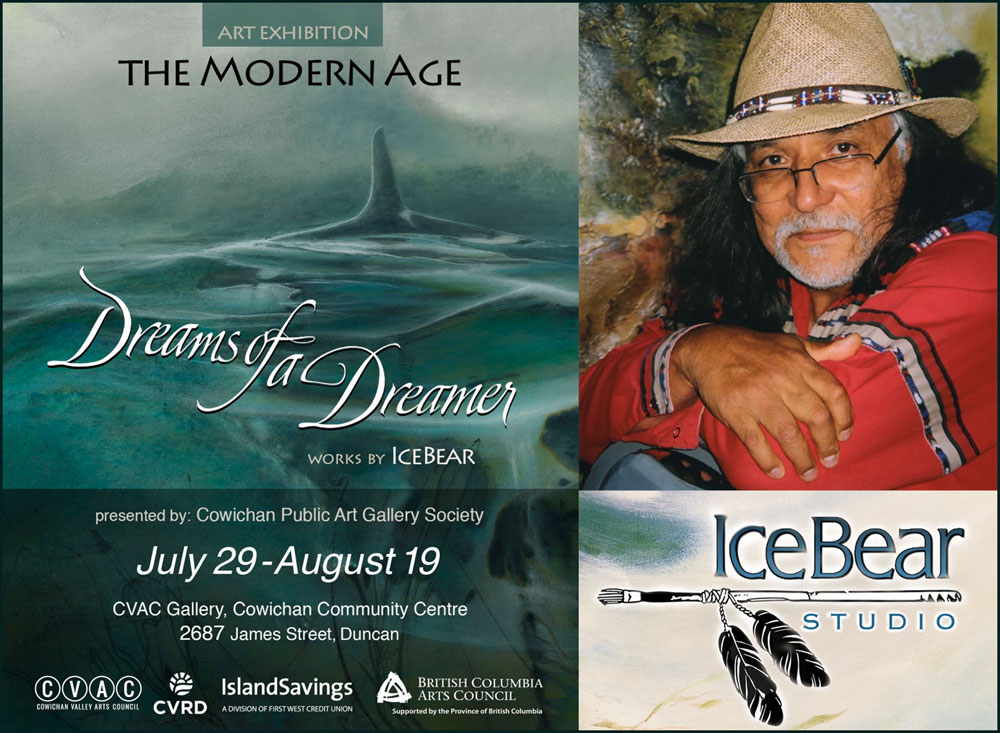 IceBear’s Dreams of a Dreamer in the Modern Age

This major solo exhibition of the internationally renowned Ojibway artist IceBear, titled The Modern Age Dreams of a Dreamer, runs from July 29 to August 19 at the CVAC Gallery, in the Cowichan Community Centre, at 2687 James Street in Duncan, BC. CPAG is also planning youth engagement opportunities to complement the show and will announce the details soon.

A public opening reception on Thursday July 28 from 4pm – 7pm will kick off the exhibition; meet the artist and listen to Ed Peekeekoot’s magical indigenous flute music with refreshments. Thereafter, the CVAC Gallery will be open daily from Monday – Friday 11am – 4pm and Saturday 12pm – 4pm. 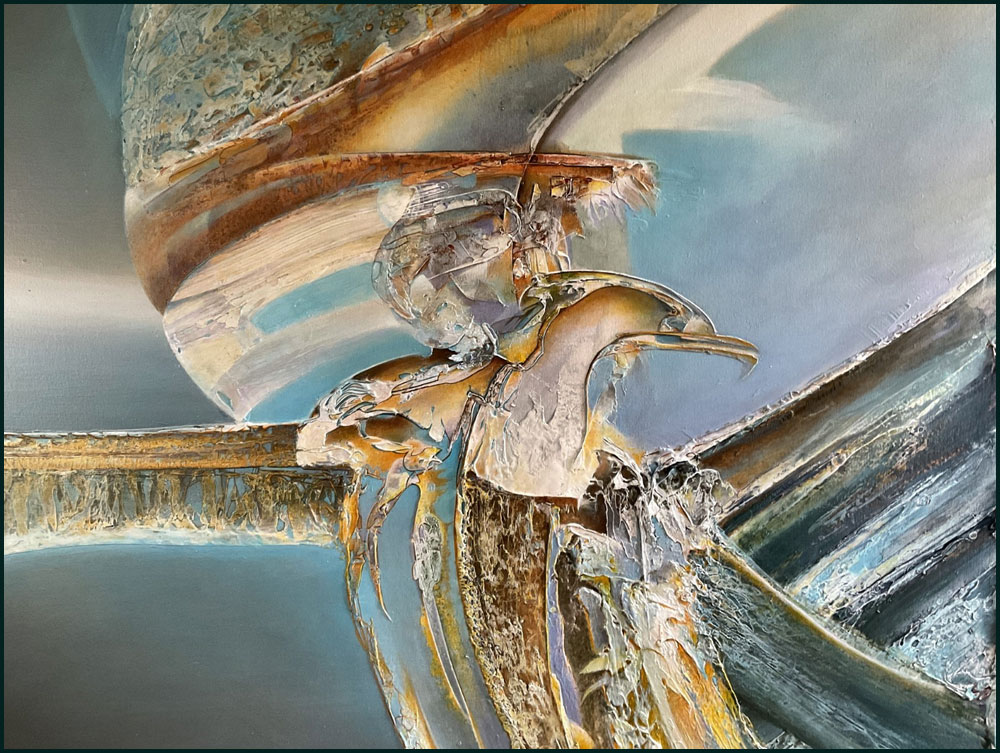 detail of “Curiosity”, created especially for this exhibition.

The exhibition is intended to spark conversation on universal themes around concern for the environment and climate change while creating space for audiences to explore and discuss the broader topic of reconciliation. IceBear’s art invokes our imagination, and this exhibition provides us with a fine selection of his paintings, sculpture and mixed media, both new and on loan from private collections.

Individuals may see different expressions of life within this exhibition. IceBear’s work explores natural, spiritual, and animal themes, with the goal of sparking unfettered conversations. Many ancient Ojibway teachings revolve around the Seven Fires Prophecies. The artist believes those seven prophecies have been fulfilled, and we are now in what are called ‘the time of The Eighth Fire’, a time of choice between two paths.

IceBear explains: “None of the issues plaguing our society today will be resolved if people stay safely on their own side of the road without opening themselves to the risky business of having serious conversations with those they perceive as ‘different’, or ‘not one of us’. Truth and Reconciliation actually includes, and indeed, requires truth, consequences, and acceptance of responsibility for the effects our actions have not only on other lives but also on the environment as a whole.

As an artist, I hope to encourage people to look, to see, and to consider something out of their normal milieu, perhaps out of their comfort zone. And then to talk about it with those coming from a different and perhaps opposite perspective. Finding common points of interest, talking about those points, sharing their own vision, and discovering that someone with whom they thought would share nothing actually perceives some things in the same way. This puts them on the same path together, even if only briefly. But it is a start. And that is how reconciliation will come about. Quietly, gently, with conversation and understanding.” 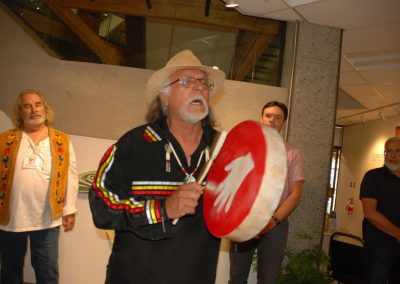 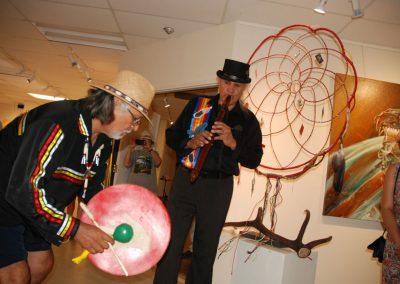 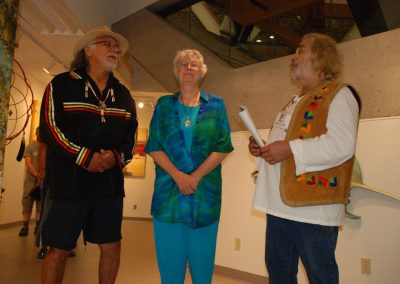 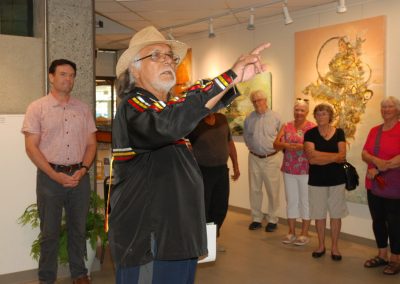 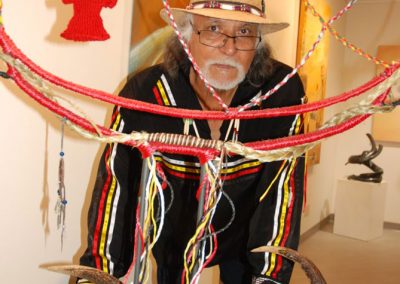 Exhibition Curator Kimberley Stanger says: “We are extremely excited that IceBear has agreed to bring his works to the Duncan community and become involved in one of the very first Cowichan Public Art Gallery exhibitions of this calibre. IceBear has a unique and poignant perspective of our world that must be shared.”

IceBear was born into the Ojibway community known as Chippewas of Nawash, on the Bruce Peninsula just north of Wiarton, Ontario. He was one of those unfortunate children gathered up in what came to be known as ‘the Sixties Scoop’. He was raised by the state but, by rare good fortune, found support for his art at the day school he attended. A nun who recognized his talent took on the challenge of getting him into formal art training at a very early age. Then, the first positive male role model in his life, a high school art teacher named Jim Henderson, spent time with a troubled young artist and set his feet on a path forward.

From his initial strong graphic images with clear aboriginal roots to the wild abstracts that now fill walls, his work over the years has explored multiple genres and themes, in two and three dimensions, governed only by the visions that fill his head. His work has been exhibited in France, Italy, Austria, New York, Dallas, Sacramento, Beijing and Taiwan, and many points in between. Major public artworks can be found in Sidney and Victoria, BC.

Additional information about the artist can be found on his website: icebearstudios.com

The Cowichan Public Art Gallery Society is committed to developing connections between art and the community. Its exhibits are intended to provoke intellectual curiosity, capture visitors’ imaginations, and encourage discourse while bringing the community together. This exhibition is one of a series of activations and events that the Gallery hopes will attract and engage a diverse range of artists along with visitors and residents alike and add to the cultural richness of the Cowichan Valley.

The purpose of the Cowichan Public Art Gallery is to advance the public’s appreciation of the arts by producing public art exhibitions, presentations, and art events, and by providing a forum for qualified artists to exhibit, present, or perform their artistic works through participation in such events.  CPAG began in 2018 as a vision for a public art gallery focused on bringing world class art to the Cowichan Valley while also cultivating local artists. Since then, support, both financial and political, has grown until we now are fulfilling our mandate through local venues while moving toward building a class A permanent gallery in downtown Duncan.

We are grateful to the Province of British Columbia for supporting this exhibition through the BC Arts Council and BC Gaming Grants.